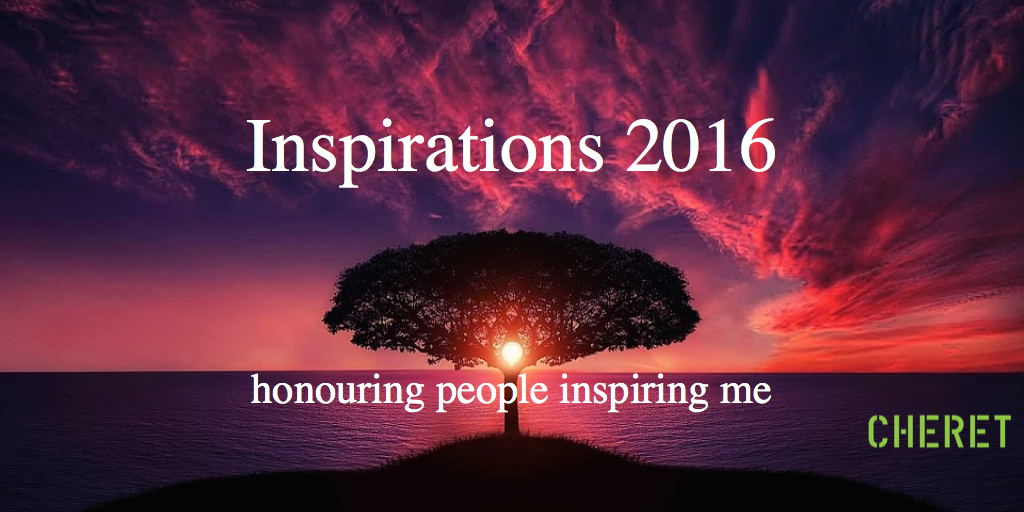 Updated on 02/05/2021: complete overhaul of how tweets and videos are embedded for a better experience.

Why write a piece like this?
I’m convinced that we all have our inspirations. We’re inspired by actions, ways of thinking and creations of other people. At least that’s what I’m experiencing. We socialize all the time and gravitate towards like minded people. The internet has brought us closer together. Everyone can express themselves freely and without any gatekeeper these days. Of course this makes for a lot of content in varying degrees of quality which permanently tries to gain our attention. In this piece I want to show you the people who inspired me most in 2016 and why. Some of them changed the way I produce my content, some of them inspired my thinking and all of them confirm a few things I’ve always known to be true.

OK, Casey. Where to begin? I’ve been following your YouTube Channel ever since the Gizmodo 3 part series of your wildly functional studio came out. It was immediately clear to me that something like this studio would be useful for my purposes as well. The DIY touch everything has, the rawness yet functionality of your overhead shooting rig, just as one example; it’s all very inspiring and practical. So I’ll give you that at the very least. You’ve changed the way I think about many things especially in filmmaking. You’ve influenced the way I edit movies. Casey, you’ve made me start a YouTube channel on which I did 30 or so Vlogs until I realized how brutally unforgiving and hard it is to really get off the ground. It must be a pure grind every single day for you! I haven’t given up on the idea of a Vlog or the constant production of content so every opportunity I have to film something and make a movie out of it, I use. Thanks for that!

while waiting for the debate to start why not watch this great vlog episode about electronic sneakers? https://t.co/q7083KjhJ2 pic.twitter.com/ffbxg0Lzeg

Yes, I’m a bit jealous that you get to try out all the nerdy stuff before everyone else gets a chance but you’re a really hard working man. You need to let me in on two secrets, though: How do you manage to live a family life, being a celebrity and still maintain the business side of things. And I also need to know how your business is going. I’m currently also a product manager of an app so, there’s that.

Gary, you’re a man with a vision and who knows what he’s worth. I’m really inspired by the monthly retainer you charge for the services of your media company. Also that you’re open about it and your ambitions to one day own the New York Jets. Love how you make yourself vulnerable, accountable and clear all at the same time.

Johann, I’ve recently seen you at the #ShapeTalk at the Wayra Tech Accelerator in Munich. You opened my eyes for tech again. I’ve tried to bury my 10 years of experience as a manager in IT because I thought it is such an emotionless trade. The way you talk about tech opened my eyes that yes, there is emotion in #tech! I just had to see the glimpse of it. I was too filled with #fear to talk to you in person, though.

Gave my talk about #fear at @48fwrd fear session tonight. Oh boy I was tensed to do a non-technical talk. Thanks @KarimJDDA for the pic! pic.twitter.com/2Vw5d1HVp7

I hope to meet you soon at another event. You’ve really inspired me to move back into tech again. I moved from product managing to the CTO role in a project the very next day. Thanks!

Always travelling under the flag of JCI to network, make things happen and “just act!” Which is how we can change everything if we’re only aware of it.

Had a very nice welcoming evening in #Aberdeen together with @iPatrickHughes and very kind local members. Thank you for all the stories.

I’ve not known you for long, but it sometimes only takes 2 hours of experiencing the same JCI meet-up and some social media interactions and all of a sudden I know if I’m inspired by someone. So thanks for putting into words what I’ve known to be true for so long. I can change everything. My contribution counts! You’re an inspiration to me.

Stephen, I had the opportunity to meet you away from keyboard in Cologne so I jumped at the opportunity. From what I could gather in all the RAW Talks, you are usually the behind the scenes man, helping to make the show happen. I’m repeating here what I tweeted at you: You are a hard working, devoted and knowledgable team player!

thanks Mark, great meeting you man!

And that is really inspiring. The diligence in which you were filming and relentlessly looking for the best sound! It really was an honour meeting you. Don’t forget about this event we wanted to talk about, though :)

While I get in touch with people on my YouTube, Facebook and get contacted a lot by many companies on LinkedIn, Twitter for me is the most open social network of them all. Sure, big news outlets and media publishers have overrun all of those places but it’s possible to immediately start a conversation with everyone you could think of on Twitter. From the seemingly unreachable CEOs, venture capitalists, movie stars and all to your workplace colleague or sister. All have equal opportunity. Just tweet at them in a polite and civilized manner and sure enough and given they’re not too busy, they’ll respond.

(26 million views on YouTube at the time of writing), which is a DIY built musical instrument using 2,000 marbles. What inspired me most and confirmed my belief in the “behind the scenes” culture of storytelling and showing that the world doesn’t only consist of events but mainly of processes leading up to events, is their meticulously crafted series of videos leading up to the big reveal of showing the world their marble machine. Martin spent a lot of time end effort in designing this machine and composed the music around it. In the end, though, these projects always are a team effort. I’ve got to give it to Wintergatan. They are hard working people bringing lovely and original music to the world using instruments they’ve built and designed themselves.

One week late but, here is the video we made of the Marble Machine!https://t.co/JMxzruUnPn

Marcus Sjöberg, your style of drumming is really inspiring. If time permits, I’d be honoured if you could teach me some of your brilliant fills. Having been a drummer myself for 18 years now, I know it is hard work to build and maintain this playing style. In one of the other really astonishing pieces of art, entertainment and music “Sommarfågel” you’re using the kick and crash build-up. That’s back in 2013. It’s becoming a thing for me now in 2016. You’re ahead of the curve, man! Thanks for reading this. You should follow me on twitter here
reviewinspirations