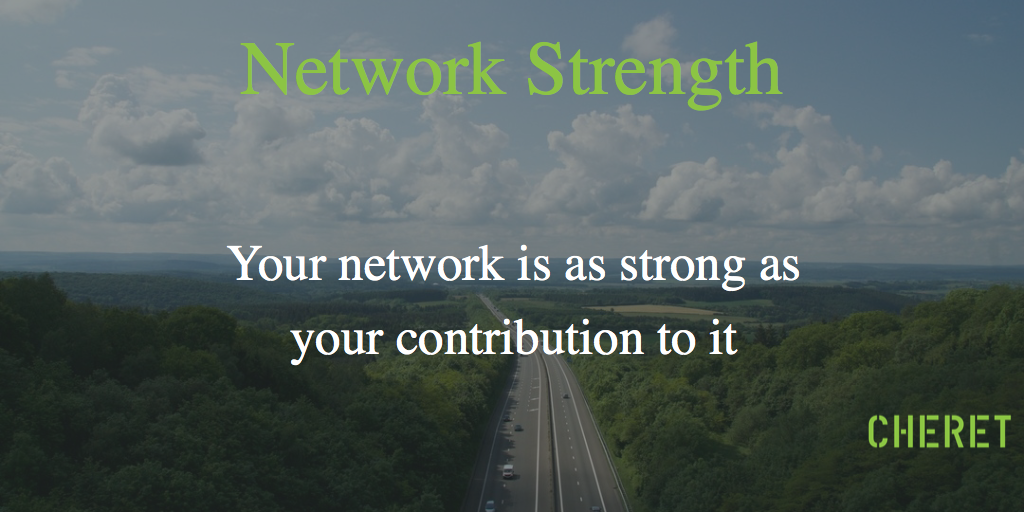 Your network strength is directly proportional to your contribution to it. I will go into more detail on how you can contribute to your network in coming articles on networking. But first I think it’s best to give you some thoughts on why I think your network is only as strong as your contribution to it. For the sake of simplicity, in this piece I’m going to stick to your local economic forum as an example for a network. In reality, though, you can apply the following thoughts to any network. Whether it is your own or an existing group of people you join.

When remembering how I started out networking with people I keep thinking about how everybody seemed to have a different perception of how strong their network was. Some would say that it’s really awesome and you can get to know influential people easily and the investment of time and money paid back quickly and big time. Others stated that membership fees were too expensive and they’re only tentatively interested in going to the next event of their group. I questioned right from the get go if it even made sense to join a network. My decision to give networking a try was quickly made when I had the chance to help rebuild a local JCI group. That immediately made me part of the core group.

Looking back at the enormous gap of perception of people between “networking is essential and good and worth my efforts” and “networking is a waste of time and I’d rather spend my time productively”, it becomes obvious that people perceive their network to be only as strong as their contribution to it. Why? Well, I’ve realised quickly that the people saying that networking is a waste of time, were the ones who didn’t really participate in events and rarely showed up to other gatherings of the group. So here are those not contributing to the network. The other people thinking highly of their network were at least contributing in a sense of being present at a number of their group’s events. Thus through their contribution experienced a higher network strength.

There is of course a different set of expectations and types of people. Someone who’s extroverted may have no difficulties to get to know new people and therefore successfully connect. But even the most extremes of the introverted can find a connection and grow out of themselves. It’s also very important to check your expectations towards a network. You don’t always have to be fully open about all your expectations but you have to at least formulate them in your head and compare your expectations with what the network has to offer either locally or globally.

The more often you show up at your group’s events, the better you get to know people and the higher the probability is that you find some common ground like a project you can work on or a need you can satisfy. If you’re new in a network I’d say you have to at least attend three meetings before you can decide if this is for you or not. Remember, though, only if you show yourself can others get to know you and that’s the way opportunity presents itself to you and your business. Be present. Talk about yourself and your business. Closely listen to everyone else. Communicate your expectations. If you know you can’t make it to a meeting, message the organiser so everyone knows you would have attended if you were available which signals engagement. And that’s where people will see you as a strong partner they can count on. This in turn builds trust strengthening your connection. A number of strong connections increases your network strength! Thanks for reading this. You should follow me on twitter here.