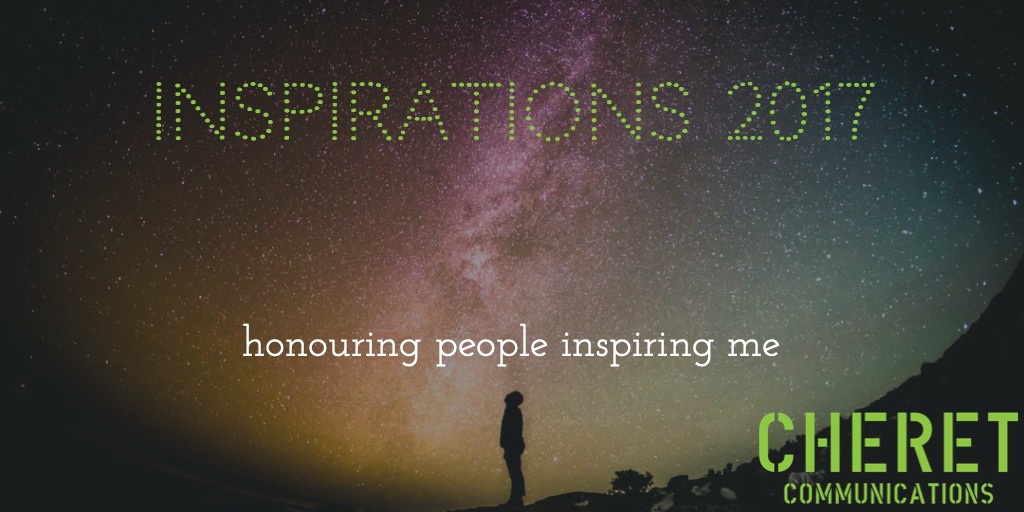 Quoting parts of my 'Inspirations 2016' article
I’m convinced that we all have our inspirations. We’re inspired by actions, ways of thinking and creations of other people. At least that’s what I’m experiencing. We socialize all the time and gravitate towards like minded people. The internet has brought us closer together. Everyone can express themselves freely and without any gatekeeper these days. Of course this makes for a lot of content in varying degrees of quality which permanently tries to gain our attention. In this piece I want to show you the people who inspired me most in 2016 and why. Some of them changed the way I produce my content, some of them inspired my thinking and all of them confirm a few things I’ve always known to be true.

So I want to continue this and wish to give something back to the people who have (knowingly or not) invested in me through their words or actions.

A forward-thinking, hot-blooded visionary from Iceland, Viktor is a force to be reckoned with. I love his humble demeanour and his getting-things-done attitude. He’s fun to be around, and his (I believe on the spot fleshed out based on one or two previous thoughts) speeches have gravitas and inspirational power I have rarely experienced. He tends to make it very personal and gives you a lot to think. He was my Outdoor Trainer at the 2017 JCI European Academy and one of 17 JCI Vice Presidents for the year 2017. What inspires me most is how humble Viktor his, how he packs a punch under the surface, and how good a listener he is.

An early leader in a small group of women in tech helping each other grow in their careers, Alaina realised that if she were willing to step up and be in the spotlight, she’d be able to make everyone else around her much more powerful as well.

She stepped up as the first CEO of Women Who Code and incorporated the non-profit, which now has 80,000 members worldwide. She inspires me by keeping it simple and straightforward. “I focus on things within my control. This doesn’t include things that occurred in the past, so I can devote my energy to creating strategies and plans to help move our team and mission forward.”

I’m purpose driven and stumbling upon Simon Sinek helped me verbalise this fact. His book “Finding your WHY” gives you all the tools to find and formulate your life purpose in a WHY statement. I didn’t personally action on this, yet. However, I helped my best friend work through the part of the book where you need a buddy to help you with. That’s when I caught even more fire for Simon Sinek and realised how much of a source of inspiration he is. I highly encourage you to find out for yourself.

His ability to put many of the things I’ve known to be accurate into words is ingenious. Main takeaway: “You realise that we are all in the same boat and that you cannot have peace, nor prosper, at the expense of ‘the other’.” See the full transcript of the speech here. I’m not sure if he was alluding to the fact that you can feel peace within yourself.

The European Academy is an intensive event bringing together incoming JCI local presidents to facilitate the development of leadership skills and start the journey to find the path to yourself. I don’t even know where to begin describing how the European Academy inspired me. I’ll pick a highlight and leave some of the rest to future articles for me to write. I put this piece together about how important it is to bring value to a network first. One of the most inspiring moments during the Academy for me was when it was announced that I had been named the “Best Delegate” out of 97 graduates from 24 European countries. Walking up on stage, it was the first time in ten years that my knees shook and I didn’t know what to do. This moment had such a profound impact on me. It felt like everything I had invested in JCI and the other delegates up until this point came back to me in an amplified way. Receiving this recognition put me in the spotlight, made me feel seen and filled me with immense pride. It is one of the results of the inspiration the Academy brings that I don’t need to hide behind false humility. I’m enabled to realise that a team of world-class trainers had made their decision (and an insensitive one I presume) and they chose me. Who am I to argue with the combined wisdom and experience of thousands of training hours among a hand-picked group of outstanding trainers. Please remind me to continue writing the dedicated article about the European Academy and the growth and development it inspired in me.

As stated by frontman Martin Molin, Wintergatan means “Milky Way” in Swedish. This band of four is best known by their internet phenomenon “Marble Machine"

(100 million views on YouTube at the time of writing), which is a DIY built musical instrument using 2,000 marbles. What inspired me most and confirmed my belief in the “behind the scenes” culture of storytelling and showing that the world doesn’t only consist of events but mainly of processes leading up to events, is their meticulously crafted series of videos leading up to the big reveal of showing the world their marble machine. This musical instrument made it into the Speelklok Museum in Utrecht. What you want to catch up with is the design and build of the follow up to the original Marble Machine called “Marble Machine X” which they started a video series on in 2017: Building Marble Machine X - All Episodes in One Playlist And yes, this is the second time that Wintergatan is featured on my inspirations of the year posts.

What is inspiration?
Inspiration is the process of being mentally stimulated to do or feel something, especially to do something creative.

I so wish to make everything that inspired me among the people listed above a part of my life and go on to create more. I want you to be inspired by the traits of the people as mentioned above as well and please let me know about it in the comments. Thanks for reading this.